Seminary News
Sports Meetings Take Place in Seminaries
2019-12-02 Source: this site
A+
A-

On the morning of 2nd, students of the seminary in classes dressed in uniforms marched into the sports ground.

President of the seminary Rev. Yang Chaoyun gave a speech, telling that the sports meeting aimed at enriching college life as well as raising students’ awareness of fitness. Keeping fit ensures one could be better at serving the church and society. He also expected students could manifest the spirits of fitness, friendship along with good personal performance via this sports meeting.

The programs included broadcasting gyms, relay races, basketball, tug-of-war, Ping-Pong, long jump, rope skipping, as well as chess games of all sorts. The top three athletes of each race would be awarded with different prizes.

To fully implement the education for all-round development, Shandong Theological Seminary held 2019 autumn sports meeting on the afternoon of November 4.

Rev. Li Hongyu, associate executive president of Shandong Theological Seminary addressed the opening ceremony. He urged students and faculty to inspire others with fitness body and vigorous spirituality, and hoped that they could strike a balance between learning and rest. Not only should students be equipped with academic competence, but also maintain physical fitness as the basis of serving the Lord. 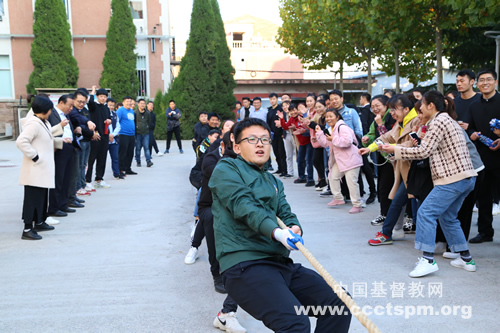 The sports meeting was organized and arranged by the Student Union of Shandong Theological Seminary, including three group programs, namely “Point race for Set shot”, “Slow Speed Bicycle-riding” and “Tug-of-War”, as well as individual programs like “Single Male Ping-Pong”, “Single Female Ping-Pong” and other funny games.

The sports meeting allows students to raise the awareness of taking exercises, foster team work spirits, and makes it possible for new students to better know each other and establish friendship as well.