At 14:00 on 29th November, 2018, the Tenth National Christian Conference had a successful closing ceremony in Beijing, hosted by Rev. Wu Wei, the newly elected President of China Christian Council. 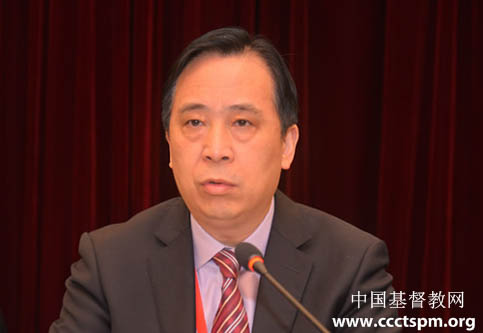 The figure in the photo above is Rev. Xu Xiaohong, Chairman of National TSPM.

On behalf of the new leadership of CCC&TSPM, Rev. Xu Xiaohong, the newly elected Chairman of National Committee of TSPM addressed on the closing ceremony. In his speech, he extended his gratitude to government leaders and Rev. Ji Jianhong, former Chairperson of TSPM and Rev. Cao Shengjie, former President of CCC, for their presence and guidance to the conference. Rev. Xu commemorated Elder Fu Xianwei and other deceased leaders who devoted their lives in church. Later, on behalf of the new leadership of CCC&TSPM, Rev. Xu said that it is of vital importance to build up a team featuring political reliability, democracy and high work efficiency. He urged all representatives to pray for the team. He stressed that the new team would inherit the essence from the former in their tradition and work ethos, work hard, remain true to the original aspiration, bear in mind the duty and responsibility, exhort the spirits of serving and dedication, further implement the rules of discussion, and establish a sound reputational system. Moreover, it is necessary to advocate the Belt and Road Initiatives and other foreign policies, show the world the church in China with a positive image. The new leadership would also endeavor to live up to the expectation of the Party and government, church workers and Christians in China, be modest and prudent, work down-to-earth and run the church well in the new era. Rev. Xu wished the new leadership to work hard and never let the people down during the term. 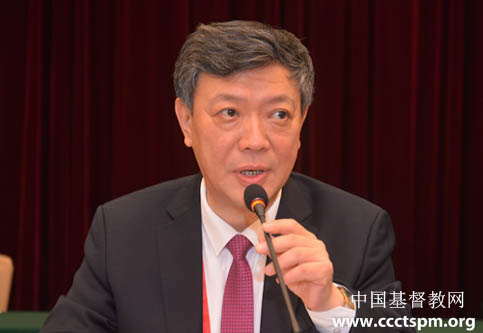 The figure in the photo above is Rev. Wu Wei, President of China Christian Council.

Rev. Wu Wei, the newly elected President of CCC addressed on the closing ceremony. He said that the conference convened successfully should be attributed to the leading by God, great support from all parties as well as the concerted efforts by all representatives. Rev. Wu stressed, as a patriotic religious community, CCC&TSPM should remain steady in adhering to Three-self Principles, inherit and proclaim the excellent tradition of loving country and loving church as the servant of the church and people. CCC&TSPM also serves as the bond between the government and believers. Therefore, it should be pragmatic and focus on self-improvement. Rev. Wu pointed out that the past forty years since the reform and opening up had witnessed significant changes. In this era, it is necessary for the new leadership to treasure the valuable historical opportunities, to forge ahead with concerted efforts in leading the church in China to hold high Christ and make unique contributions to the ecumenical church.

The Tenth National Christian Conference then ended up with a complete success.

After the closing ceremony, there was a closing service. Rev. Dong Meiqin presided over the service in the singing of hymn I'll Go Where You Want Me to Go. Rev. Chen Lifu gave a sermon titled ‘Take on the Duty and Fulfill the Responsibility’. He cited the verses from the Book of 1 Corinthians 9:16-18 and exhorted all church staff to raise the awareness of serving and responsibility as Paul, be fearless, seek for no profits, dare to sacrifice, preach the gospel, and fulfill the responsibilities in becoming good servant according to the will of God.

The three-day Tenth National Christian Conference achieved a great success. Representatives present expected the Christianity in China to have a promising future under the guidance of the new leadership of CCC&TSPM.