From July 1 to 5, 2019, a revival meeting was held by Shaanxi Hancheng Christian Council (CC) in Yangshan Village Church. Over 300 believers from churches in the northern part of the city attended. 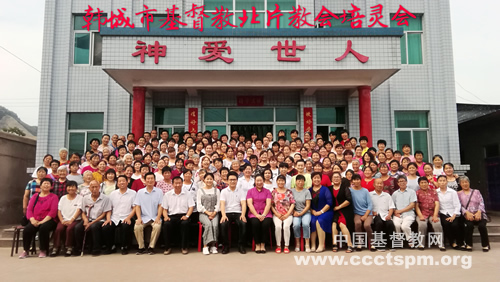 At the revival meeting were Teacher Lang Qingyun from Xianyang City Church, Elder Xu Fengxi from Baishui County Church, Preacher Zheng Qianjin and Preacher Wang Chao from Jingyang County, who were invited to give lectures.

Teacher Lang Qingyun shared the message themed after “The Church”, which was elaborated from the aspects of “The church’s definition, nature, prefiguration, role and its symbolization”.

The theme of the sermon given by Elder Xu Fengxi was “Believe, shake off, endure, learn and hope”. He urged the congregation to have faith in the one and only God when serving, take off every burden and sins that cling so closely, endure at all times, and continuously learn to look up to God at any circumstances.

May God bless the church in Hancheng becoming a golden lampstand that can shine upon the people around, doing what is pleased by Him and honoring the name of the Lord.