From October 19th to 24th, 2020, Rev. Fan Hong’en, Chairman of Guangdong TSPM, who is also the President of Zhuhai CC and Chairman of Zhuhai TSPM led a four-person team heading towards Lushui City of Nujiang Lisu Autonomous Prefecture in Yunnan Province for poverty-relief donations and surveys.

In response to the call of local authorities, churches in Xiangzhou District of Zhuhai City have raised 283,000 CNY in total to help Lushui Kindergarten in Liuku Town as well as Makuadi Village in Gudeng Country. 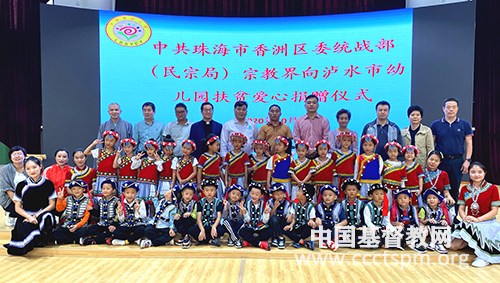 Located in the southern part of Lushui City, Liuku Town is underdeveloped and lacking in access to transportation due to its geographic features of high mountains and deep valleys. The ethnic minority people living there near the boarder are suffering poverty and in need of care and assistance.

Zhuhai CC&TSPM has been actively encouraging staff members and believers to love those in need and practice the biblical teachings as “[to] leave the sheaf for the fatherless and the widow” (Ref. Deuteronomy 24:19), “it is more blessed to give than to receive” (Ref. Acts20:35), and “whoever is kind to the poor lends to the Lord, and he will reward them for what they have done.” (Proverbs 19:17)