From October 16th to 18th 2018, Jiangsu Theological Seminary held a series of 20th Anniversary Thanksgiving commemorative activities. Faculty and students, fellow workers and many distinguished guests gathered together to celebrate the 20th Anniversary of the Seminary. 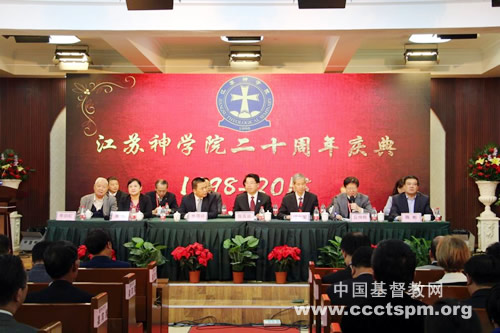 After the Thanksgiving Service, the logo, motto and anthem of Jiangsu Theological Seminary were released. The Cross Theme Exhibition Hall was also unveiled.

Anniversary commemorative activities also included a thanksgiving evening gala, a school-community social gala, and an alumni fellowship gala, etc. With a grateful heart, participants sang and danced to celebrate the twentieth birthday of their seminary.

Although the three-day anniversary ceremony soon came to an end, Jiangsu Theological Seminary never fails to keep moving forward. In the future, all faculty and students will continue to adhere to the school motto of 'Vision, Responsibility and Serving', be down-to-earth, and forge ahead with determination, so as to create a brighter future.