As one of the most prosperous streets in Xiamen, Zhongshan Road attracts numerous tourists from home and abroad every year. The New Street Church stands out on the street, which is also known as the First Church in China. 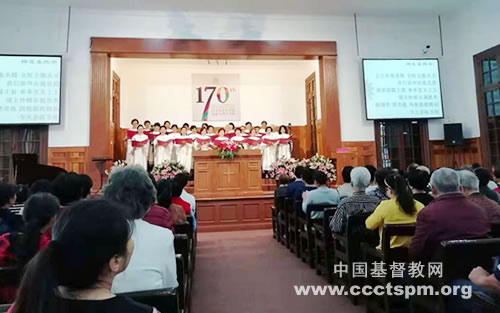 The New Street Church celebrated its 170th anniversary on 18th November, 2018. The celebration began with the singing of hymns at 8:15 a.m. Rev. Xie Liren gave a sermon titled ‘the Road to Church Revival’. He pointed out that the revival of church started with examination and confession. The church can genuinely embark on the road to revival only when all the clergy and church members keep confessing, examining and renewing themselves, thus becoming living Christians. Elder Zhou Changji delivered a speech which briefly reviewed the development and current situation of the New Street Church. He affirmed the ministries that the church had been working on in the last decade, and reflected on deficiencies as well.

The celebration also witnessed an ordination ceremony that ordained four sisters as new ministers in the church. Afterwards, the 170th anniversary celebration ended with the hymn 'Lord, Revive our Church!' sung together by the congregation.