Those to be ordained in the ceremony were Liu Lingwei, Han Beiou, Yan Xiyu, Weng Cuiqin, Liu Meichun, Xie Hong, teacher Xu Lingxiao and teacher Chen Huihui from Nanjing Union Theological Seminary. Rev. Zhangkeyun announced that all nine co-workers had been recommended by Nanjing CC&TSPM and evaluated by Jiangsu provincial CC&TSPM. He said that ordaining pastors was to ensure co-workers to better preach the gospel of the Lord and serve in the church of God.

Rev. Li Lancheng presented to the congregation all the co-workers to be ordained. Rev. Zhang Keyun read the word of blessing and prayed. The Nine co-workers responded and took the pledge with sincerity. 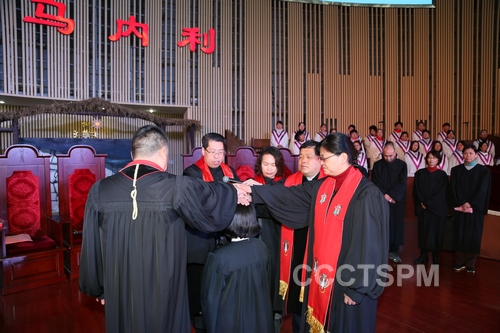 Then it followed by the laying on of hands. Nine candidates kneeled and received the laying on of hands before the pulpit by six pastors. Rev. Zhang Keyun ordained these co-workers in the name of the Holy Father, the Holy Son and the Holy Spirit, and pleaded that they would be consecrated by the Lord, and fulfilled with spiritual blessings as useful utensils of the Lord. He put on stoles for each of every newly ordained pastor and held the acceptance ceremony. Rev. Chen Bin awarded them pastoral certificates. Rev. Li Lancheng and Rev. Kan Renping gave them Bibles as presents.

Brothers and sisters from Shengxun Church as well as students from the seminaries prepared flowers for these newly ordained pastors and extended their warm congratulations.

On behalf of the ordained pastors, Rev. Yan Xiyu gave a speech and expressed their gratitude. He said that he would be committed to the teaching of the Bible, serve the church, build up himself and make contribution to the development of Christianity in the Chinese context.

In the end, Rev. Liu Meichun, one of the ordained pastors, gave benediction to the congregation.