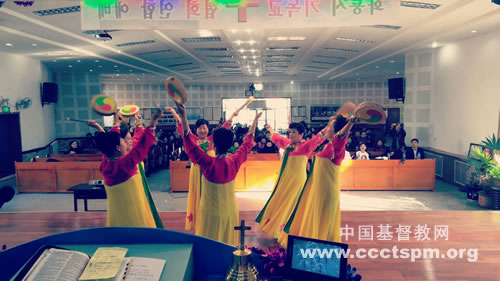 Facing North Korea across a river, Helong is located south of Jilin Yanbian Korean autonomous prefecture, and most of its residents are Korean ethnic group. In recent years, things like the declining of local residents and believers, and the lack of evangelists turn out to be the stumbling blocks for church development in this mountainous and scarcely-populated region. Ever since the establishment of Helong CC&TSPM, evangelist trainings as well as joint service are held annually as grass-root churches and church-affiliated fellowships in Helong have been highly valued.

During the service, Korean ethnic believers danced and sang hymns.