Church News
Shandong CC&TSPM Hosts a Symposium on “The History of the Christian Churches in Shandong”
2019-07-25 Source: this site

On July 17, 2019, a symposium on “The history of the Christian Churches in Shandong” was hosted by Shandong CC&TSPM in Shandong Theological Seminary. Attendees included Rev. Gao Ming from Shandong TSPM, Emeritus Archbishop John Chew from the Anglican Diocese of Singapore, Professor Hu Weiqing from School of History and Culture, Shandong University, along with scholars from School of History and Culture, Shandong Normal University and pastors. 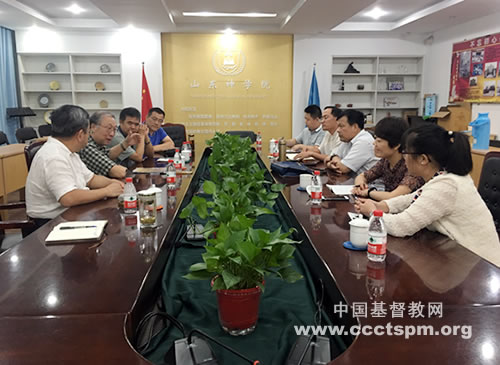 The symposium was hosted by Rev. Bian Ronglian, associate general secretary of Shandong CC&TSPM. Focusing on the CUV Bible’ translation, scholars and pastors proposed ideas regarding the historical background, the translating process, and the interaction between evangelists and the Christians in Shandong, etc.

Rev. Jiang Nuan mentioned the book A Course of Mandarin Lessons: Based on Idiom and referred to several contributing factors that drove the May Fourth New Cultural Movement from different perspectives, including the roles of Pekin Mandarin becoming the standard language of Chinese spoken language and the Chinese spoken language turned into written language, and the work done by Shandongnese assistants in the course of the Bible translation. Rev. Jiang also introduced the compilation of the history of Christian churches in Shandong Province.

In his speech, Rev. Gao Ming noted that the CUV Bible is loyal to the original texts of the Bible, and it also includes rich connotation of Chinese culture. It expresses how to integrate outstanding traditional culture into practices of Christian faith.

At the end of the symposium, participants concluded that it is necessary to further explore valuable experiences from the history of Shandong churches as well as predecessors’’ resolution to serve, which can become the impetus for the clergies in Shandong to run good churches, serve the society, and benefit the people.