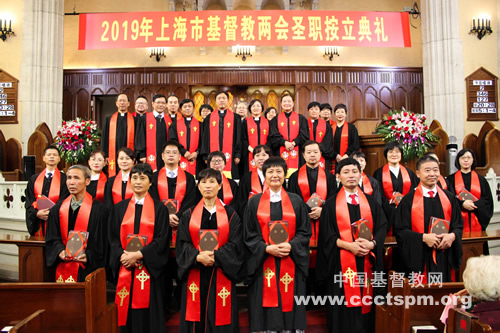 It was followed by a symposium, hosted by Rev. Ge Weizhong. At the symposium were Rev. Cao Shengjie, former president of China Christian Council, Rev. Xu Yulan, leaders of CC&TSPM of various districts, newly-ordained pastors and Elders, and clergies from their churches.

Rev. Cao Shengjie urged the newly-ordained staff members to keep on equipping themselves and enrich the knowledge of many kinds.

Rev. Geng Weizhong concluded that the pastoral team in an international metropolitan like Shanghai in this era should devote more time to the theological thinking, and constantly enhance overall qualification of its members.

On August 24, 2019, Shandong Christian Council held an ordination service in the Gospel Church of Shandong Theological Seminary. Over 100 pastors and staff members attended the ceremony. 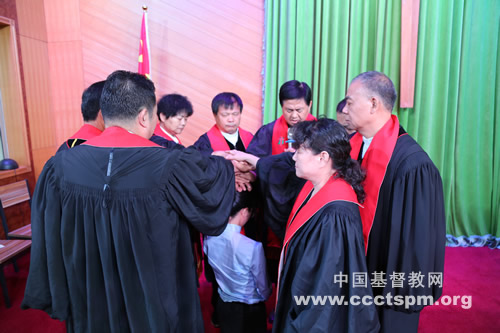 Rev. Gao Ming, president of Shandong TSPM exhorted the two candidates who were to be ordained to stay held in the Lord, resolve to be hard-working and hopeful, make it our goal by faith to please Him and prepare to appear before the judgment seat of Christ.

The ordination service ended up successfully with Rev. Zou zhongyi’s praying and the benediction by the newly-ordained pastor Rev. Wang Wei.