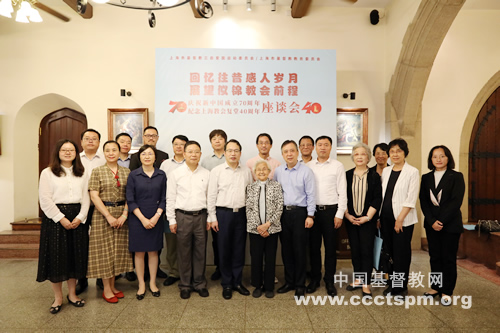 The symposium in remembrance of the founding of the PRC as well as the reopening of the church started at 9 a.m. Over 80 people from Shanghai political circle, academia and religious groups attended the symposium.

Rev. Xu Yulan, president of Shanghai TSPM, Rev. Cao Shengjie, former president of China Christian Council and others addressed at the symposium. They came to commemorate the 40th anniversary of restoring the church in Shanghai in sharing accomplishments and experiences.

At last, Shanghai CC&TSPM delivered a special gift -- a video of blessings from senior pastors who witnessed the development of the church in Shanghai during the past four decades. Among these pastors, the oldest pastor Rev. Dai Lizhen is 102 years old. 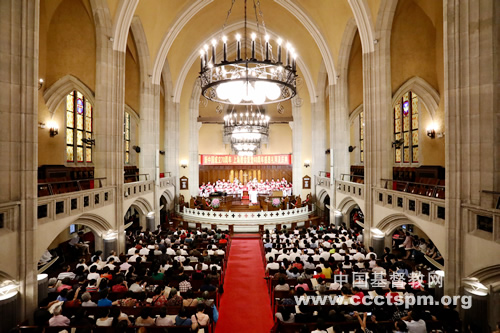 In the afternoon, there was a thanksgiving service and a ceremony held at Mu’en Church. Rev. Jiang Qianli, vice chairman of Shanghai TSPM gave a sermon entitled “Forever Blessings”. Rev. Xu Yulan led the congregation to pray for the country and church. Rev. Cao Shengjie gave the benediction.

The CC&TSPMs of various districts in Shanghai prepared shows and programs like dances, chorus, poem recitation and etc. for the ceremony. More than 600 people participated in the activity.