On September 23, 2020, a commemoration held by CCC&TSPM commenced in Shanghai to celebrate the 70th anniversary of Three-Self Patriotic Movement of the Protestant Churches in China.

Attendees consisted of CCC&TSPM leaders including vice secretary general, associate general secretary and above, members of CCC&TSPM’s Board of Supervisors, representatives from older generations of church leaders, theological seminaries and young church workers, as well as representatives from National Council of YMCAs, National Council of YWCAs of China, Shanghai YMCA and Shanghai YWCA. Mr. Wang Zuo’an, vice minister of the United Front Work Department of the CPC Central Committee and director of National Religious Affairs Administration as well as academic guests were also present at the commemoration. 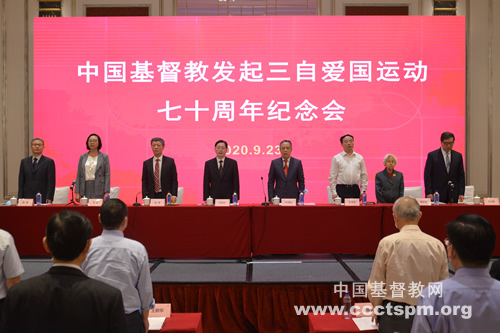 Before the commemoration, Rev. Wen Ge, associate general secretary of CCC led the devotion. Rev. Xu Yulan, vice chairman of National TSPM and chairman of Shanghai TSPM gave a sermon with the title of “Remain True to the Original Aspiration, and Not Disobedient to the Vision”. She cited the verses of Acts 26:19-20, exhorting the audience to remember the original faith and love, bear in mind the history and never forget the original aspiration of running the Three-Self Church well.

Rev. Wu Wei, president of CCC, presided over the commemoration, and Rev. Xu Xiaohong, chairman of National TSPM delivered a report entitled “Adhere to the Indigenization and Contextualization of Christianity in China, Promote the Tradition of Loving the Country and the Church, and Run the Church in China well in the New Era”. 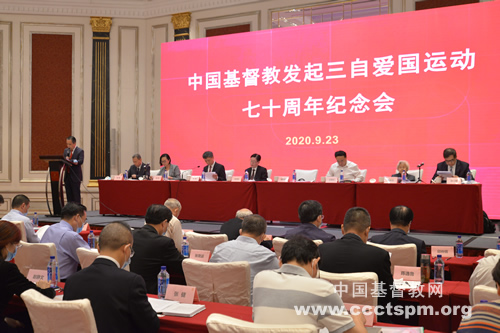 The report called on the broad church members to uphold the Three-Self banner, abide by the Three-self Principles, adhere to the indigenization and contextualization of Christianity in China, endeavor to serve with faith, hope and love under the guidance of the Holy Spirit, and move forward with one accord to establish a church that can please God and people and that grow in a healthy and harmonious way.

70 years ago, Mr. Y. T. Wu and other 39 protestant leaders co-issued the Direction of Endeavor for Chinese Christianity in the Construction of New China (commonly known as Three-Self Manifesto). On September 23, 1950, the full text of the Three-Self Manifesto as well as an editorial entitled Christians’ Patriotic Movement were published in People’s Daily. The editorial said that “this manifesto is of historical significance for Chinese Christianity”. The launch of the Three-self Manifesto symbolized that the church in China began to self-govern, self-support and self-propagate, and lead the broad church members to embark on the path of loving the country and the church. 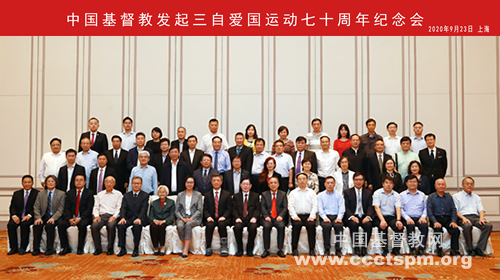