On 10th December, the 7th National Joint Meeting of Religious Communities was held in Beijing. The meeting centered on exchanging the ideas about how to revise and implement the bylaws of national religious community. Leaders, General Secretaries from national religious communities, associations, YMCA and YWCA attended the conference. Wang Zuo’an, Vice Minister of the United Front Work Department of the Central Committee, Director of the State Administration of Religious Affairs attended the conference. Li Guangfu, who is the President of Chinese Taoist Association and holds the rotating presidency of the 7th National Joint Meeting of Religious Communities, presided over the meeting. 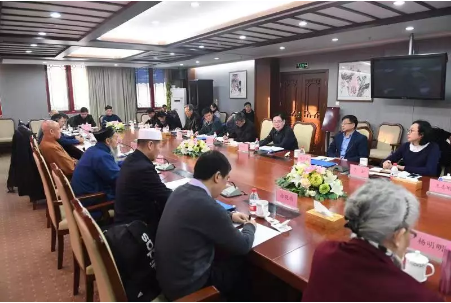 Yanjue, Vice President of the Buddhist Association of China, Li Guangfu, President of Chinese Taoist Association, Yang Faming, President of Chinese Islamic Association, Fang Xingyao, President of Chinese Catholic Patriotic Association and Vice President of Bishops Conference of the Catholic Church in China, Wu Wei, President of China Christian Council, and Wu Jianrong, General Secretary of the National Committee of YMAC addressed in turns according to the respectively work of their religious communities. They reached the consensus that the major assignment to accomplish is to revise the bylaws of the national religious communities under the guidance of Xi Jinping Thought on Socialism with Chinese Characteristics in the New Era and the spirit of the 19th Congress of the Party. By doing this, it helps further legalize, regulate and normalize the self-regulation on religious communities, and ensures that regulations can play a role in guiding, regulating and safeguarding clergies and general believers, thereby providing the institutional basis of resolving urging problems in current religious fields. It is agreed to thoroughly, precisely and deeply learn the spirit of the newly revised Regulations on Religious Affairs to focus on new situation and new problems, concentrate on major problems and weaknesses and fasten the speed of revising bylaws.