Rev. Wang Daiyu, chairman and president of Dunhua Christian Council and TSPM gave a sermon titled “Jointly Experience the Miracles of God” to share how to experience God’s miracles by citing Matthew 14:13-21. Rev. Wang exhorted church members to shoulder the responsibilities and be fully devoted, lead a transformed life to share God’s grace and experience His miracles together.

It has been 30 years since Tienan gathering point held its first service in the house of Brother Wang Dechang in 1989. The congregation began with over ten believers.

In May 1995, the gathering point purchased and moved into a 60-square-metre house. There were nearly 60 believers at that time. In 1996, with about 80 believers, Tienan gathering point was registered and officially authorized.

In 2001, Tienan gathering point was rebuilt and expanded into a 160-squre-metre church that could accommodate over 300 believers. 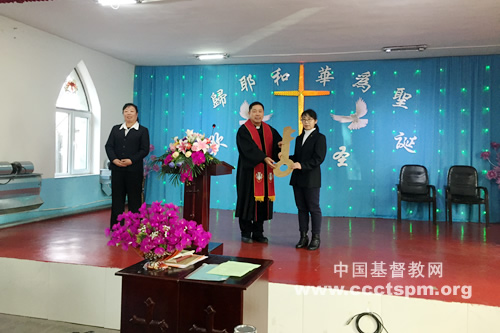 Then Rev. Wang Daiyu led the congregation to kneel down to pray and deliver the gathering point and the servants in the hand of God.

At last, the hand-over ceremony was closed with the singing of praise.