At 9 a.m., March 21, 2019, over 300 people gathered together in Shaoguan Church for the thanksgiving service of the 50th anniversary of Mingxin Fellowship. Participants were brothers and sisters with vision impairment from Guangzhou, Zhaoqing, Shenzhen, and staff members from churches in Guangdong Province. 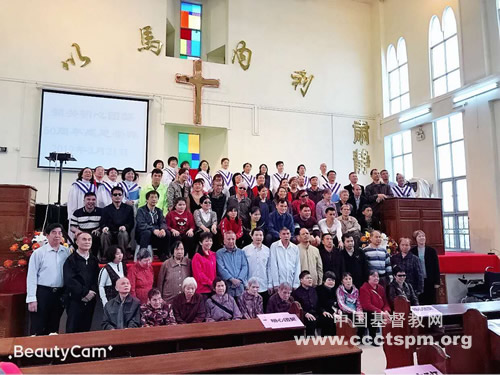 In 1969, Mingxin Fellowship began from a prayer meeting consisting of several blind sisters from Shaoguan Welfare Factory. At that time, they only had two Braille Bibles and a radio left by a deceased teacher named Zhu Ciren.

During the past fifty years, these blind children who were abandoned by parents were taken in by the Lord (Psalms 27:10) and became useful people in all walks of life. Among them are teachers, pianists, massagists and even preachers. It is in the weak that God has made known His mighty power.

The Thanksgiving Service, hosted by Sister Liao Fengping, began in the singing by Mingxin Fellowship.

Rev. Huang Yingxin, chairperson of Shaoguan TSPM shared the history of Mingxin Fellowship. Rev. Jie Qiufu, vice chairperson of Shenzhen TSPM gave a sermon entitled “Tell me what I may do for you”.