At 10 o’clock, 15 December 2017, the launch ceremony of the Chinese Study Bible was held in the national office of CCC & TSPM. Guests from the Crossway Publishing House (Crossway), the United Bible Societies (UBS), the British and Foreign Bible Society (BFBS), the Amity Foundation and the collation team of the Chinese Study Bible were invited to attend the launch ceremony. 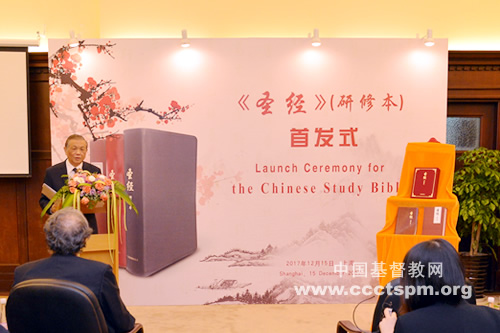 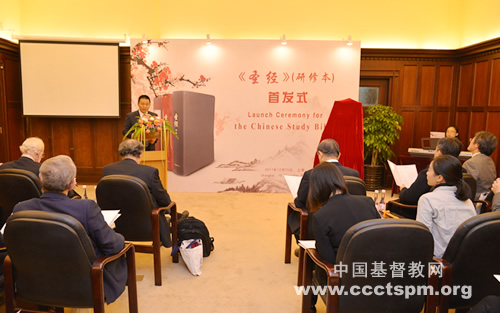 Rev. Shan Weixiang, Vice President of China Christian Council presided over the launch ceremony. With the hymn ‘Give me the Bible’, Rev. Xu Xiaohong, Vice Chairperson of the National Committee of Three-Self Patriotic Movement of the Protestant Church in China prayed for the ceremony. He thanked God for his leadership and for blessing the church in China with the new Study Bible . Later on, Rev. Dr. Miller Milloy and Rev. Wang Peng read scriptures from the Old and New Testaments separately. Rev. Shan invited guests to watch a short video clip together, which reviewed the process of the publication of the Chinese Study Bible. Rev. Shan pointed out that the publication of the Chinese Study Bible conformed to the requirement of church development and to the need of younger church members. The Chinese Study Bible was one of the significant achievements that the church in China made through exchanging and cooperating with overseas churches as well as the ecumenical churches. After the video clip, Elder Fu Xianwei, Bishop John Chew, Global Council member of the UBS, Mr. Dennis, President of Crossway, and Mr. James, Chairperson of BFBS together inaugurated the Chinese Study Bible, marking the formal launch of the book. 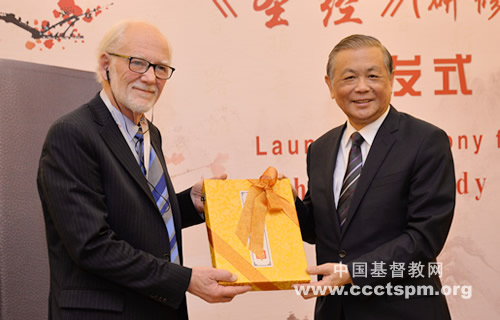 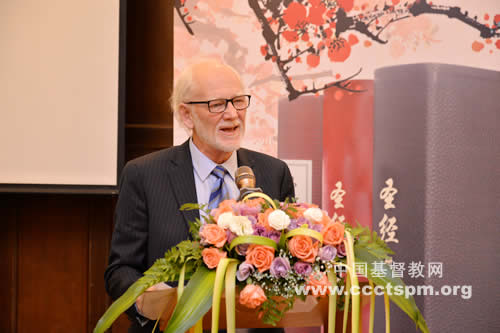 In his speech, Elder Fu recalled his visit to Crossway, when he was attracted by the Study Bible of the English Standard Version (ESV) for its novel and rich contents as well as its excellent printing. He hoped to introduce this kind of Study Bible to benefit the church in China. Elder Fu said, ‘The church in China always have the tradition of loving the Bible and holding high the Word of God. Since the reform and opening-up, CCC&TSPM has been committed to doing the Bible publication ministry well. The number of Bibles published and distributed till now is nearly 80 million, which includes Bibles in different versions and specifications. In the past five years in particular, China has become one of the countries with the largest Bible circulation annually in the world with a printing volume of four million copies a year. Although the Bible has a very wide influence in China, people still find quite a number of scriptures hard to understand due to differences in history, geography, culture etc, thus they need help. In recent years, besides the publication of some Bible commentaries, the church in China also introduced and published some versions of Bibles with Biblical explanations. This undoubtedly enabled church members to better understand the word of God’. Elder Fu said that CCC & TSPM got the copyright support from Crossway in 2011 and decided to introduce its copyright. ‘Each piece of work has a particular context. Similarly, the comments in the Study Bible, though translated into Chinese, were still imprinted with the ideas of the original author. To make the annotated Bible serve the church in China in a more precise way and conform to the reading habits of Chinese church members, CCC & TSPM organized a collation team composed of seminary teachers and experienced clergy to carefully proofread and revise the translated part. It took six years to complete all the translation and revision of the comments of the Chinese Study Bible. Hereon, we would like to express our sincere thanks to Crossway, BFBS and UBS who offered strong support to this ministry. We would also like to express our gratitude and respect to the translation and collation teams for their painstaking work. The Chinese Study Bible is another annotated Bible with detailed reading materials published by the church in China since the devotional Bible. With the help of the Study Bible, clergy and church members would be able to rightly handle the word of truth, proclaim pure gospel, and resist heresies and cults. They would read and digest the Word of God and live it out through their lives. Furthermore, the Study Bible can help broaden their theological view, improve the quality of church members and bear witness of being light and salt. The scriptures in the Chinese Study Bible are from the Chinese Union Version, which was published and distributed in the spring of 1919 in Shanghai. The publication of the Chinese Study Bible would be the best commemoration for the hundred-year history of Chinese Union Version’ 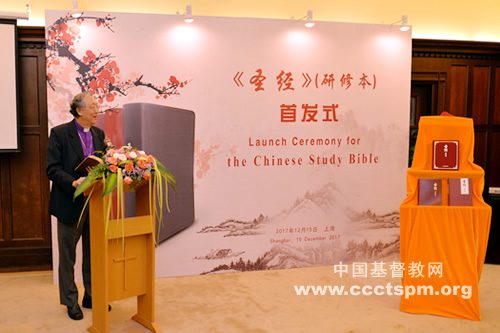 Bishop John Chew said that he had been looking forward to the publication of the Bible for a long time. ‘Your hard work in the past six years is as meaningful as Governor Joseph who stored up grain, which would certainly bear fruit in the future. The fruitful cross-border cooperation is indeed a wonderful witness. May God’s words last forever in this constantly changing era’. Mr. Dennis still remembered the moment when Elder Fu first visited Crossway. He thanked Elder Fu for his insight to make the dream of distributing the Chinese Study Bible come true. He also gave his thanks to all the teams for their concerted efforts. ‘The Lord has done great things for us.’ May this book be of great benefit to pastors and church members in China. Mr. James appreciated the warm greetings from China and hoped that the Chinese Study Bible with clear explanations could let more people understand the Bible. He also expressed gratitude to the opportunity of cooperating with the church in China and becoming part of the big family that love and accompany each other. 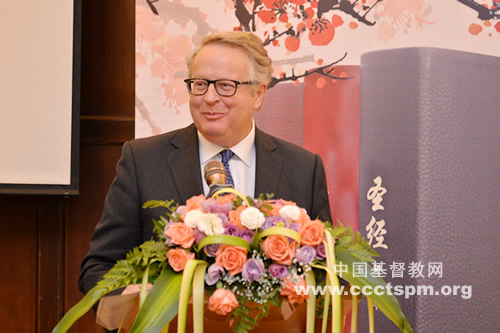 At last, CCC & TSPM exchanged gifts with guests. Group photos were taken after the meeting. It was learned that the Study Bible of ESV published by Crossway was annotated by 95 highly respected Christian scholars and professors. The whole book contains over 3 million words, 20,000 brand-new insightful comments, 80,000 scripture references and indices, 200 maps, and over 40 illustrations etc, reflecting the latest achievement in the field of contemporary Biblical studies. With the most comprehensive comments and the most colorful layout, the Study Bible has become one of the most popular versions among English-speaking countries. On the launch day of the Chinese Study Bible, all the 3500 Bibles in stock were sold out. The Bibles would be sold to church members in local distribution centers. May the Holy Spirit use this Bible so that God’s word may become “a lamp for their feet” and “a light on their path”. 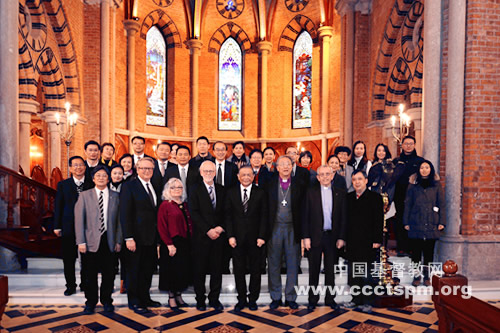