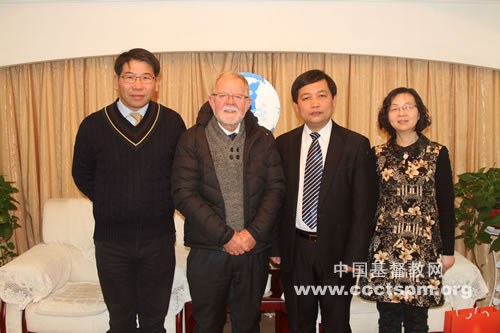 Rev. Li extended the delegates regards from Rev. Wang Jun and introduced the history of Christianity entering into Shaanxi Province, the status quo of the church in Shaanxi Province as well as major ministries carried out by Shaanxi CC & TSPM in recent years. He also explained patiently on several questions raised by the delegation. Both sides communicated, discussed on a few topics, and enjoyed an relaxing and pleasant atmosphere. The delegation also introduced UCA and told their feelings towards the church in China and the church in Shaanxi Province. They saw this visit as beneficial in removing misunderstandings. The delegates from UCA wished for a stronger tie in communicating between both sides in the future and could jointly serve and pray for more needy people. The delegation earlier visited Shaanxi Bible School and had a wonderful moment talking with the teachers and students there.

Mr. Jia Haiguang, Deputy Director of the Administration Office of Shaanxi CC & TSPM and other co-workers also attended the meeting.