Meeting with them are Rev. Shan Weixiang, vice president of CCC, Gu Mengfei, associate secretary-general of TSPM and other members of CCC&TSPM. They made a brief presentation to the UBS delegation on the development of the Church in China, including the media and publication ministries. The two parties also discussed about the 'indigenization and contextualization of Christianity in China' and the 'dialogues in church unity'.

Dr. Jutta Henner introduced to CCC&TSPM that the UBS Church Relations Committee is a new department founded in 2013, serving the purpose of strengthening communications between different denominations and religions. They had long been waiting for the visit to the Church in China. She also said that the growth of the Church in is a great joy shared by the church in many other countries, and the Committee expects a closer tie in the cooperation with the Church in . 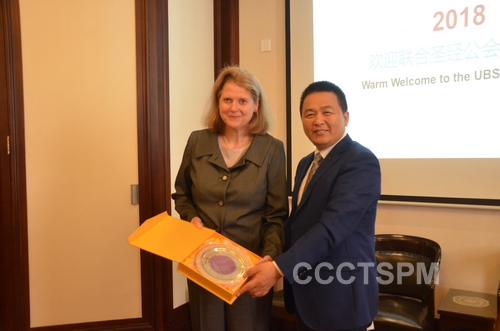 During the meeting, Rev. Shan Weixiang pointed out that Bible ministry and theological education were the two earliest ministries of the Church in China. Forty years since the economic reform in the end of 1970s have seen the Bible bring much benefit to the Church in China. He expressed gratitude to the UBS for their help with the Bible publication in China.

Mr. Gu Mengfei explained the basic characteristics as well as the underlying reasons of the development of Christianity in . He stressed that when there was a shortage in the church staff in the end of the 1970s, the Bible played a significant role in helping believers understand the gospel. Today, the church in enjoys a stable development. However, it still suffers from a lack of pastors when the increase of believers far outpaces that of the clergy. The church is also confronted with heresy and cults. The Bible is therefore still taking the significant role of pasturing the church and offering guidance for its healthy development. Mr. Gu also mentioned the ongoing ministry of indigenizing and contextualizing Christianity in and its future prospect. He refuted the rumor that  'is trying to revise the Bible'.

Mrs. Chen Hongli, from the Media Department of CCC&TSPM, introduced the publication ministry of CCC&TSPM and its current challenges. She showed to the delegation the photos of the cover pages of Bibles designed with Chinese characteristics and of the scenes when Bible copies were donated and distributed to believers.