Mu’en Church is located in No. 316, Middle Xizang Road, Shanghai. It was originally known as Moore Memorial Church, with its forebody being Trinity Church, which was built in 1874 by Missionary Lambuth of the Methodist Episcopal Church near Zhengjia Wooden Bridge at Shanghai's French concession (near Middle Fujian Road and East Yanan Road). In 1887, Missionary C.F.Reid built and named it Methodist Episcopal Church. In 1890, it was renamed Moore Memorial Church in order to commemorate the deceased daughter of a donor called Moore from Kansas, US. In the late 1920s, the church was renovated with famous architect László Hudec as its designer. 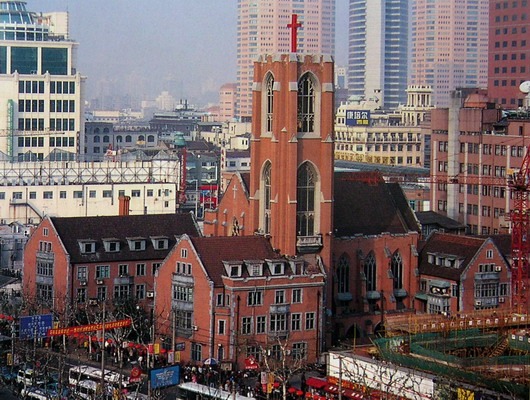 In 1931, the newly renovated Moore Memorial Church was built on today’s Middle Xizang Road and Hankou Road. The new church included a main hall, a bell tower, a four-floor building, etc. The main hall can accommodate about a thousand people, with carved stone decoration on the surface of columns and veranda railings. In 1936, a five-meter revolving cross with neon lights was installed on the top of the bell tower. In early years, most of the church’s senior pastors were Americans.

After the outbreak of the Pacific War in December, 1941, Moore Church was occupied by the Japanese Army as a horse ranch. When it was recovered in September 1945, the year the War of Resistance against Japanese Aggression ended, most of the pews were sabotaged. In 1958, Moore Church was used for union worship of the Huangpu District, and was renamed Mu’en Church, which means “showering in the grace of the Lord”. 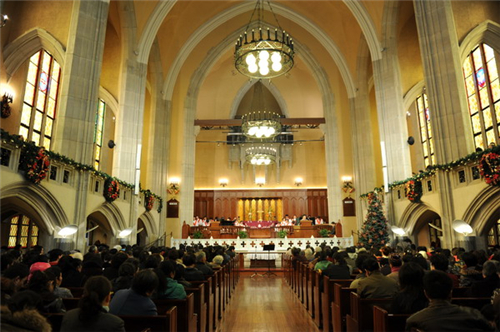 During the Culture Revolution, the church was forced to close and all religious activities were banned. On September 2rd, 1979, Mu’en Church was reopened for Sunday services, the earliest Protestant church in Shanghai to restore church service.

Mu’en Church has become the place to hold local or even national major Christian events and ceremonies, including the consecration of Bishop Shen Yipan and Bishop Sun Yanli in 1988. Canterbury Archbishop of British Anglican Church Robert Alexander Kennedy Runcie once attended a thanksgiving service in Mu’en Church. In July 1993, Mu’en Church was listed as one of the culture relics reservation units in Shanghai.