Built in 1928, Hongde Church (Fitch Memorial Church) is located on No. 59 Duolun Road, Shanghai. It was jointly subsidized by Northern Presbyterian Church and Chinese Christians. The name of the church was given in memory of George F. Fitch (1845-1923), who was a renowned missionary in the church and one of the leaders of American Presbyterian Mission Press. On the occasion of the rising nationalism, the Christian community advocated the localization of the church building. Hence, instead of being designed into a western style, Hongde Church features a traditional Chinese roof with corbel bracket and cornice (that is common to see in Chinese imperial palaces but rare to see in churches). 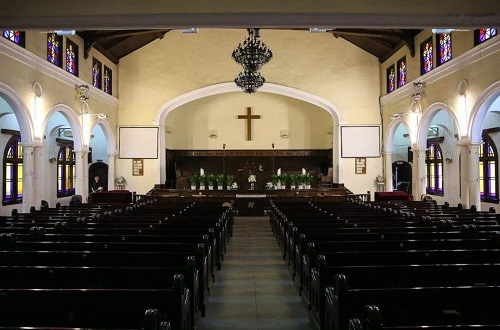 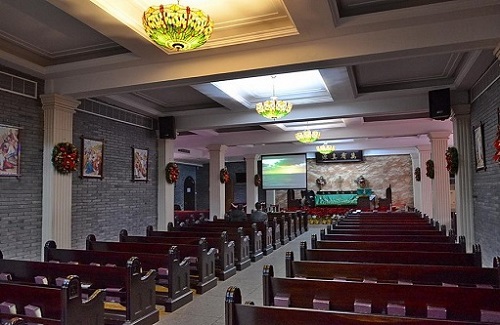 As one of the few churches outwardly built in ancient Chinese architecture styles, Hongde Church is a rectangle-shaped, two-storey building. Height of the main hall (Picture 1) on the upper floor is higher than that of the corridors on both sides, which makes it look like a three-storey building from the outside. There was a primary school on the ground floor called Xiude Primary School and now it is the side hall (Picture 2) of the church. The main hall is for the worship service use. The main building of the church covers an area of over 700 square metres. People can enter the building from its bell tower, of which the roof features four roof angles. The outer wall of the building is made of bricks and round cement pillars are painted in red. Under the roof are colorful paintings to adorn the wall. Looking from the outside, the church is characterized by the typical ancient Chinese palace style, while it is also noticeable that there are some western architecture techniques adopted for building the church. 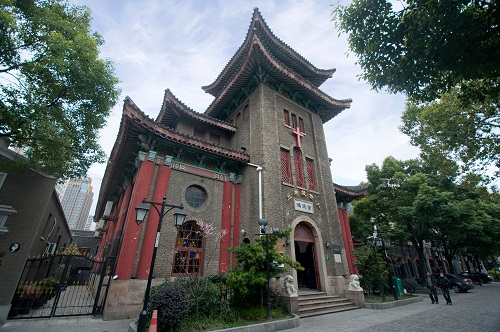 In 1994, Hongde Church was listed as a reservation unit in Shanghai. It now opens to the public as a religious site. The church holds three services on Sundays and has nearly 2,500 believers.