Bible Day 2021, with a theme of “Rhymes and Verses: Singing the Word out with Chinese Rhythms”, was hosted by CCC&TSPM, and organized by Fujian CC&TSPM and Fujian Theological Seminary in the seminary on December 12, 2021. It was attended by Rev. Shan Weixiang, Vice President and General Secretary of CCC, and staff of Media Department of CCC&TSPM. 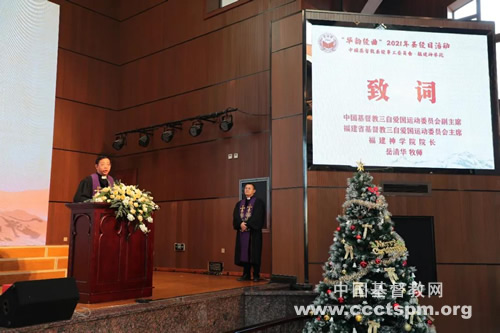 The activity formally kicked off at 9 o’clock in the morning in Fushen Church. Rev. Yue Qinghua, Vice Chairperson of National TSPM, Chairperson of Fujian TSPM & President of Fujian Theological Seminary, gave a passionate welcome speech. He noted that Fujian churches love Bible just as churches in other parts of the country.

At the dawn of the Republic of China, Bible had been translated into several Min dialects, and the translations were published, distributed and read by locals. Ever since 2016, churches in Fujian have been working on promoting the Indigenization and Contextualization of Christianity in China. For example, Fujian CC&TSPM has held activities that call for works of original compositions of sacred music for three consecutive years, which achieved much success. The “Rhymes and Verses” held this year on Bible Day, also ignited people’s enthusiasm, who would then use Min dialects and melodies to tell the Word of God. 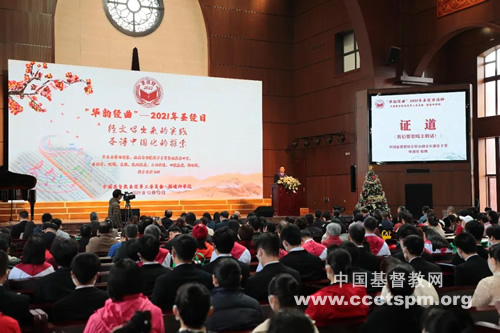 Rev. Shan Weixiang preached a sermon titled “We Sing the Word of God” quoting Psalm 119:172 and Colossians 3:16. He said that Christianity is a religion of singing. With hymns and sacred songs, our worship could go up to God, whose Word would also be engraved in our hearts and then renew our daily lives.

The previous activities on Bible Day in 2019 (Hangzhou) and 2020 (Guangzhou), were themed on “Reading the Bible from the Chinese Perspective” and “Hand Copying the Scriptures”. This year in Fuzhou City, the theme is “Singing the Word out with Chinese Rhythms”. 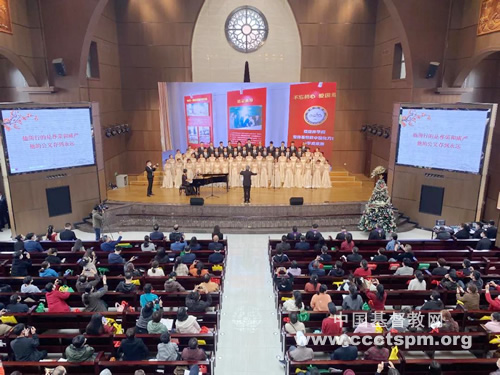 Such activities revolve around the common visions that appeal to all Christians, both shepherds and His flocks, to value the Word of God. And this also could be regarded as a good attempt to indigenize Christianity in the Chinese context. It is well worth to mention that this year there’s a refreshing collection of works gathered from many local churches, featuring different dialects or melodies to sing the scriptures. This is an exploration of indigenization of sacred music in China.

Rev. Shan Weixiang then encouraged the audience to hand copy, read and sing His word on the one hand; on the other hand, most importantly, practice it as the salt and light to honor God and benefit the people, which is the ultimate goal of doing so. 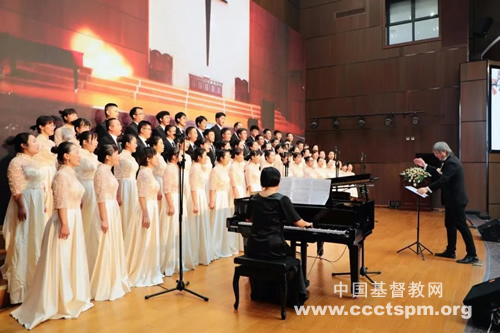 One of the highlights of the “Rhymes and Verses” event was the performance given by the seminary’s Holy Choir that used the rhythms and rhymes with Chinese characteristics to sing the verses of Psalm. The Min language group from the Trinity Church of Gulangyu’s Glory Choir, sang a song named “The Lord Is My Shepherd”; teachers from the seminary sang a solo titled “Glory of the Creator”; “Praise the Lord” is a big chorus performed by the Holy Choir, and the magnificent performance that marked the climax of the activity was imbued with the characteristics of Han folk song, Min opera, and Western tunes. 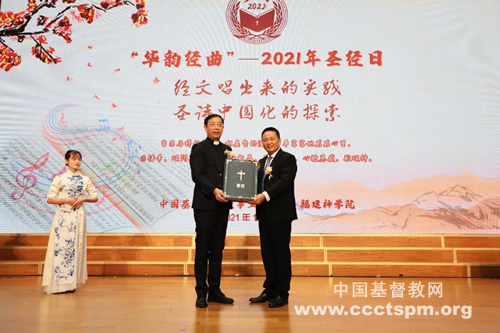 Attendees of Bible Day 2021 “Rhymes and Verses: Singing the Word out with Chinese Rhythms”

Relevant readings
CCC&TSPM Joins the Seminar to Commemorate the 50th Anniversary of the Restoration of the Lawful Seat of the PRC in the UN
Rev. Wu Wei Participates in G20 Interfaith Forum 2021
Celebration of NJUTS’ 70th Anniversary Launched in Nanjing
CCC&TSPM Celebrates the 70th Anniversary of Three-Self Patriotic Movement of the Protestant Churches in China
Christianity in China Is on the Move to Fight against the Novel Coronavirus
Most popular
1
CCC&TSPM and Singapore Four Denominations Chinese Churches Committee Meet Virtually
2
CCC&TSPM Attends the 3rd International Seminar on Religions and Ecological Civilization
3
Guangdong CC&TSPM Ordains Pastors and Elders
Devotional Companion