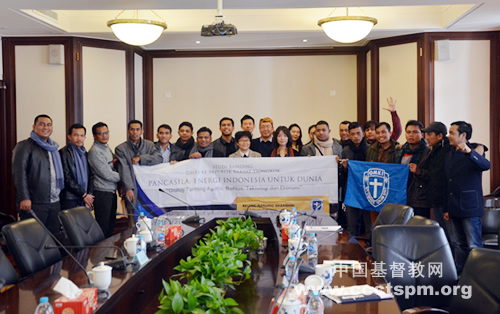 Sahat Martin Philip, chairperson of GMKI, said that GMKI is a Christian organization of college students founded in 1950, whose commitment is to promote tolerance and love.

Rev. Lin Manhong warmly welcomed the delegation. Staff members from  Theological Education Department and Media Department introduced their work respectively. The delegation expressed their concern about Chinese Christians’ contribution to social development. Rev. Lin said that Christians in China had largely succeeded in benefitting people and contributing to the prosperity of the country. She listed the Social Service programs launched in recent years, including the ‘Honeydew’ Student Grant Project, aid for the infrastructure construction of underdeveloped areas, social service training, AIDS high-risk behaviors intervention, etc. She added that local churches also conducted a variety of social work. Rev. Lin emphasizes that apart from the service Christians rendered to society, their being responsible, hard-working and praying for the country also brought benefits to China.

The delegation appreciated CCC’s sharing of its ministry in the reconstruction of theological thinking and regarded it as a good attempt for them to learn as the church in Indonesia was in need of indigenization as well. They also wondered if there were any Chinese church buildings designed in ethnic minority styles. Rev. Lin gave a positive answer and briefly introduced the indigenization of church buildings in China and the project of Indigenization and Contextualization of Christianity in China as a whole.

In the end, both sides exchanges gifts and took group photos. Staff members from Chinese embassy in Indonesia were with the delegation during the visit. Ms Gu Jingqin, Mr. Jiang Guoqiang, Ms Xu Liu and Ms Yang Chengcheng of CCC participated in this meeting.